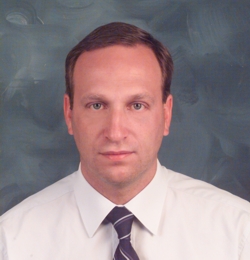 Doctor Stratigos was born in Athens in 1965. He received his medical degree from the University of Athens in 1989 and a Ph.D. degree from the same university. He did his internship in internal medicine at the Massachusetts General Hospital, Boston (1992-93), followed by a residency in the Department of Dermatology, Harvard Medical School, Boston (1994-97), and a clinical/research fellowship in cutaneous photobiology and lasers in the same department (1997-98).v Since 1999, he has been a member of the faculty of the Department of Dermatology, University of Athens Medical School and currently holds the position of Associate Professor of Dermatology-Venereology.

He is member of the board of several Greek and international societies, including the European Academy of Dermatology-Venereology (EADV), the European Society of Cutaneous Lupus Erythematosus (ESCLE), and the Hellenic Society of Melanoma Research. He has served as Chairman of the Scientific Program Committee of the EADV (2006-9) and is currently Secretary of the European Association of Dermato-Oncology (EADO). Doctor Stratigos has published over 80 original and review articles in international peer-reviewed journals (with > 700 citations). He has co-authored a book on pediatric dermatology and has participated as chairperson or speakers in more than 50 Greek and international scientific events.

Doctor Stratigos is a member of the editorial board of two international scientific journals and has been invited as a reviewer for 13 international journals. Since 2003, he has been Director of the Pigmented Lesion and Melanoma Unit of Andreas Sygros Hospital (Athens), and in 2007, he established the Photobiologic Laboratory in the same hospital. He has been principal investigator or co-investigator in five research programs (funded by the EU or University of Athens) and has participated in eight multicenter clinical trials. His research interests include the epidemiology and molecular epidemiology of melanoma and skin cancer, photocarcinogenesis, and cutaneous photosensitivity disorders.